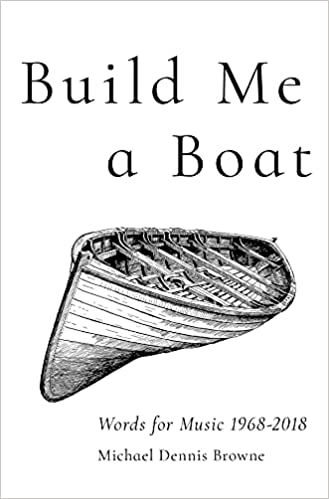 Build Me a Boat: A Virtual Reading

Savor an evening of beauty and reflection, anchoring us in the hope that both poetry and music offer to us. Join poet Michael Dennis Browne as he interweaves music clips and words in a virtual reading from his new book Build Me a Boat, which gathers words that Browne has written for music over the past fifty years. Some are poems written with music in mind; others are lyrics, song cycles, songs for children, and libretti written as he collaborated with a number of different composers.

The result is a volume that sits comfortably between poetry and music, lyrical and rhythmic and memorable.

Build Me a Boat gathers a selection of the words that poet Michael Dennis Browne has written for music over the past fifty years. Working with a number of different composers, Browne has ranged widely across forms; what we discover here are lyrics, song cycles, songs for children, excerpts from libretti—some of them in free verse, some of them formal—as well as poems that, while not written to be part of specific musical works, were nonetheless written with music in mind or under the influence of particular works. The result is a volume that sits comfortably between poetry and music, lyrical and rhythmic and memorable.

Librettist Michael Dennis Browne talks about working with the composer Stephen Paulus on The Road Home. American composer Paulus, who passed away in 2014, co-founded the Minnesota Composers Forum, now known as the American Composers Forum, and won posthumous Grammy Awards for Best Contemporary Classical Composition and Best Classical Compendium. The Road Home has been performed by King’s College Choir on its two most recent tours to the USA, and has become a favorite for the performers and audience members alike.